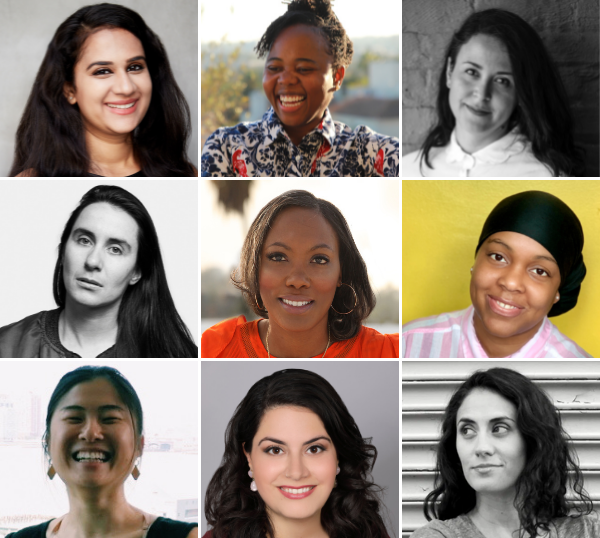 Congratulations to the participants of the first cohort of WIF’s Emerging Producers Program!

The one-year course provides women and non-binary people, early in their producing careers, the information and entry points they need to advance. Through master classes, mentorship, and advising, participants will gain valuable insights into the fundamentals of creative and physical production, the various tracks producers can take, and how to start a successful independent business. Participants, who were selected by a jury of industry leaders and veteran producers, have experience in producing shorts, digital content, commercials, series, documentaries, and are focused on building careers across various producing tracks in both film and television.

“In our work, we’ve seen a growing need for resources dedicated specifically to producers,” says WIF Director of Programs Maikiko James. “As we continue to make strides for gender parity in our industry, it’s critical to support underrepresented producers. This cohort represents extraordinary talent that we are committed to supporting in sustainable careers.”

This program is made possible in part by a grant from the City of Los Angeles Department of Cultural Affairs. It is also supported by eMinutes, which is waiving its fees for legal services including forming LLCs, for participants of the WIF Emerging Producers Program.

The Emerging Producers Program participants are:

Apoorva Charan is an L.A.-based producer who was born in India, raised in California, and started her career at FremantleMedia Singapore as a digital producer. Charan received her M.F.A. in Film from Columbia University and has produced over twenty short films including LONELY BLUE NIGHT, which won the Audience Award at AFI Fest 2020, was an official selection at the Atlanta Film Festival, was a finalist for the HBO APA Visionaries award, and is available to stream on HBO MAX; 空间 DISTANCE, which premiered at the 29th Singapore International Film Festival 2018, and won Film Pipeline’s Best Film Award 2020; and INTERIORS, which premiered at TIFF 2018 and was an official selection for Clermont-Ferrand 2019. Charan was a 2019 Project Involve Creative Producing fellow, a 2020 Film Independent Creative Producing Lab fellow, is an Executive Leadership mentee for the Salon’s inaugural class, and has worked in development at Big Beach, Walt Disney Studios, and Blue Harp. Her producing projects include GULAAB, a feature film which participated in the Open Doors Hub at Locarno in 2018, Film Independent’s Fast Track in 2020, and is a collaboration with Arte Germany; and “Horizon,” a series in development at Ivanhoe.

Lydia “Sue-Ellen” Chitunya is a filmmaker who hails from Zimbabwe. She is a 2019 Georgia State University “40 Under 40” honoree and a graduate of the UCLA Professional Producing Program. Her success as a short film producer was recognized with membership in the Academy of Motion Picture Arts and Sciences. She is a Roger and Chaz Ebert Foundation Fellowship award recipient. Chitunya has participated in various artist development programs including: Film Independent Producing Lab, WIF INSIGHT, 2019 Industry Academy, Rotterdam Lab, Film Independent’s Project Involve, and Berlinale Talents. Her varied work experience includes marketing for Disney College Program and programming for Zimbabwe, Atlanta, and Slamdance Film Festivals. She recently worked as a Post Production Coordinator on Marvel Studios’ AVENGERS: ENDGAME (2019) and BLACK PANTHER (2018).

Luz Agudelo Gipson, a Colombian native, attended Columbia College Chicago, where she received a B.A. in Film and Video. She is proud of her immigrant roots, which have allowed her to experience the U.S. through a different lens. Her works include several award-winning short films and countless commercials for many brands, most notably the “Obama for America” 2008 presidential campaign, which received the Titanium and Integrated Lions Grand Prix award at Cannes. Currently, she is a Senior Producer at the leading advertising agency FCB. She was a 2016 Film Independent Producing Lab fellow, a 2018 TFI Network fellow, and participated in WIF’s 2019 Film Financing and Strategy Intensive with the Spanish-language film GIRL WITH CHILD.

Vanessa Haroutunian (they/she) is a queer producer, artist, and curator. Haroutunian received their B.A. in Film & Electronic Arts from Bard College, where they were awarded the Jerome B. Hill Award for Documentary Excellence. Haroutunian recently produced the short film “Flourish”, directed by Heather María Ács, which won Best LGBTQ Short at the Big Apple Film Festival, and has screened at various festivals including Oscar-qualifying HollyShorts, OutFest Fusion, NewFest, London Shorts, and at BAM’s Programmers Notebook series. Haroutunian also produced the short film “Flock”, directed by Ariel Mahler, which is currently being developed into a feature with Haroutunian attached to produce. The feature screenplay of Flock was a finalist for Diverse Voices’ 2021 Screenwriting Lab. This year, Haroutunian teamed up with co-creators Daquisha Jones and Ariel Mahler to produce a special season of the web series Bad Ally: Quarantine Chronicles. Haroutunian is currently in post-production on a short film entitled “Blue”, directed by Tae Braun and HK Goldstein, starring two transgender leads that has been supported by InsideOut’s Re:Focus Fund. Haroutunian’s goal is to produce films that fill the gaps in the film industry, creating opportunities for diversity, inclusivity, and intersectionality in front of and behind the camera.

Takara Joseph was born in the Virgin Islands and raised in Atlanta. She is a 2020 Film Independent Project Involve fellow and a Daytime Emmy-nominated producer and director of the 13-time Daytime Emmy-nominated series “Giants,” which originally premiered on Issa Rae’s YouTube channel, where it amassed over 6 million views. “Giants” is currently streaming exclusively on BET+. Praised for its authentic portrayal of the Black millennial experience, “Giants” has won Best Drama at the Streamys, the Indie Series Awards, and the International Academy of Web and Television Awards. She also created the series “Unapologetically Black,” which was an official selection for the Pan African Film Festival and the BronzeLens Film Festival. Most recently, she produced the short film JUNEBUG, which was an official selection for the Martha’s Vineyard African American Film Festival, Pan African Film Festival, and American Black Film Festival. Takara recently signed on to produce her first documentary film, SOCIAL BEAUTY, chronicling how influencers are changing the standards of the mainstream beauty market. Her company, Silhouette Productions, is focused on telling impactful stories that explore the human experience and drive conversation.

Quan Lateef-Hill is a multi-hyphenate producer, filmmaker, and creator developing and producing multi-platform content in television, film, digital, podcast, live event, and experimental production. Throughout her 20-year career, Lateef-Hill’s award-winning body of work has included scripted and unscripted content and experiences with studios and networks such as Viacom/BET/Vh1, Quibi, New York Times, Discovery, NBC, PBS, Bravo TV, Issa Rae Presents, Refinery29, Doc Society, Tool of America, Phenomenon, Citizen Jones, AFROPUNK, BLACK GIRLS ROCK!, and others. She has produced and directed talent around the globe, including locations such as London, Paris, Johannesburg, and Brasil. Many of her roles have included development, packaging, pre- and post-production, staffing, impact strategy, talent booking, and management. Lateef-Hill formed Too Qute Productions in 2009 to produce and create projects that expand current perspectives of marginalized communities and focus on the narratives of women, youth, and people of color. Her goal is to inspire change and use storytelling to shift the global consciousness. Recently, she was an inaugural member of the 2019 Blackhouse Foundation/Independent Film Project (IFP) Multicultural Producers Fellowship, supported by HBO.

Alexandra Perez is a producer and production manager who has worked on content spanning television, film, digital, and commercial platforms. Her experience as both a studio production executive and freelance producer has given her unique expertise on projects of every format and budget. She began her production career as a Production Coordinator at Entertainment One before making her way to Blumhouse, as Manager of Production for TV. She transitioned to freelance production on the Blumhouse/Hulu anthology series “Into The Dark,” where she served as Production Supervisor across two seasons. Most recently she has produced commercials and branded content for clients including: BuzzFeed, Uproxx, Amazon Prime Video, Universal Music Group, Walmart, and FabFitFun. Originally from South Florida, she is a first-generation American who graduated from the University of Chicago with a B.A. in Cinema and Media Studies before moving to Los Angeles in 2012.

Juliana Schatz Preston is a Colombian-American documentary film producer and director. Her directorial debut, LOS COMANDOS, was shortlisted for the 2019 Academy Awards and was a nominee for the 2018 International Documentary Award. Her short film, WAITING FOR TEARAH, premiered at the Double Exposure Film Festival and was supported by ITVS, FRONTLINE, Firelight Media, Type Investigations, and The Fund for Investigative Journalism. In 2020, Preston won the Silurians Press Club medallion for her Reveal & Type Investigations radio documentary about parents of children with severe mental illness being pressured to give up child custody. In 2018 she was nominated for a Livingston Award for Young Journalists for her film LOS COMANDOS. Preston started Complex World, a youth culture/current affairs documentary series that goes beyond the headlines with in-depth stories told through a pop-culture lens. Preston loves the opportunity to speak with students. She has been a guest speaker for students at Columbia University, York College (CUNY), and IRIS-In / Ghetto Film School, among others. Preston has an undergraduate degree from Northeastern University and attended the Columbia University Graduate School of Journalism. She lives in New York with her husband and two young sons.